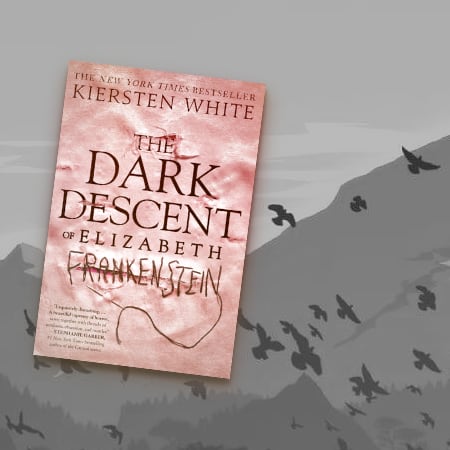 There are very few books that equate to fighting a battle of wits via each chapter. This book is one of them, and with each chapter I was left feeling many things, but always bested.

Elizabeth Lavenza is a young child when she’s bought as a companion for the intimidating and aloof Victor Frankenstein. His parents are at ends in how to find him friends, there are hints of scandal and the family is as much on edge as she, the day Elizabeth meets them. For her it is a chance to escape her cruel caregiver, to be a part of an affluent family where she will have safety and food. Elizabeth is honest about herself to herself, she is deceptive and will say and do what is required to make her way. She will be Victor’s everything if it means she has a place that is hers.

The house was dying. I saw it all now: The dusty corners. The cracked and fading paint. The doors that did not hang quite right, either never closing all the way or closing so tightly I feared being locked inside a room, unable to open them again.

The story begins with Elizabeth and Justine travelling to Ingolstadt where Victor and Henry have gone to study. After months of no word, Elizabeth decides she’s becoming a liability in the Frankenstein household and must ensure Victor re-affirms his need for her companionship in order for her position in the house to remain. She has not been trained in anything, yet she has book smarts via her stolen knowledge of Victor’s books. She takes a willing Justine, governess to Victor’s younger siblings with her, as her friend and confidante. The story then oscillates between the girls’ search or Victor and their past histories with each other.

Justine, Henry, Victor and to a lesser, later, extent Mary, make up the small, claustrophobic world of Elizabeth. As tenuous as her hold is on Victor and her means, so too are all the relationships amongst the four main characters. Elizabeth has been rescued by Victor from her life of poverty and misery; she in turn has rescued him from the people around him and their distrust of his intentions. Justine, a few years younger and in a similar state to Elizabeth when she was rescued is taken in by the latter. Justine is the kind and good friend that contrasts with Elizabeth’s clever, wilful and conniving nature. She’s only ever a victim of circumstances of her own needs and making. Irony and cruelty abound, but by the time dots are joined, it is too late for some.

Readers familiar with Mary Wollstonecraft’s Frankenstein will have an idea of who Victor is – Elizabeth and her story were perfectly in tune with the general sense of dread, yet separate from the original. Retellings or re-imaginings can go many ways. This is a story that takes hold of the reader quickly and ferociously – not letting go till the very end. My heart was in my mouth towards the end. Literally felt the need to put the book down, swallow a few times and then continue. Elizabeth is not a replacement for Victor, rather she is his companion and her impact on, reckoning with the proverbial monster is what forms the crux of the story.

Without giving the surprises away, it suffices to say this novel will thrill you. The narrator, Elizabeth, is unpredictable. Hope is continually given and dashed, often cruelly but generally not with gore, rather with dread and desolation.

Read the book for these reasons and because after a long time, this was a re-imagining that managed to tell a story that is familiar but with its own merit.

Perhaps that was why Victor was so desperate to imitate life with his own twisted version. He had never been able to feel things as deeply as he should; he had been raised in a home where everything was pretense and no one spoke the truth. Not even me.

iThere are no comments